The Los Angeles Auto Show is going on now (through December 10th), and despite it being one of the last of the calendar year, it is considered the kick-off event among the major auto shows worldwide, mainly because the model year for vehicles starts in the last few months of the calendar year.  For the second time the organizers hosted an event in the days before the auto show opened to the general public called AutoMobility LA, which I mentioned briefly in the wrap-up to the innovation series, and will cover a bit below.  But the focus today will be on what benefit you can get from going to the auto show in your metropolitan area, even if you don’t plan to be in market for a vehicle for 2-3 years.

You Can Kick the Tires (But Please Don’t)

First and foremost, research shows that people making trips to fewer dealerships during the purchase process: as mentioned in an earlier article, the average buyer visits 1.2 dealerships – meaning on average 4 out of 5 visit just the dealership they buy from, and the other visits 2 dealerships.  Therefore, the auto show provides a great place to get up close and personal with the vehicles in your consideration set, without the pressure of the dealership trying to sell you a car that day.  With most vehicles that are on display you are able to sit in the vehicle to get a feel for whether it would be a good fit.  Sometimes you can see under the hood, or in the trunk, if either of those are important to you.  And yes, if you feel the need to literally kick the tires you can do it – but you really shouldn’t, and if they throw you out of the auto show, for doing it I’ll just say “I told you so”.

Another benefit from going to the auto show is that you can get a better sense of what’s on the market now, but also what will be on the market (potentially) in the next few years.  The auto manufacturers often have at least 1-2 concept vehicles that may not ever get to production, but at minimum may have some new styling cues or high tech features that will be used on production vehicles, or the manufacturer may bring a vehicle that isn’t available in the current model year, but will be available next model year (meaning at this point a 2019 vehicle), so they can begin building some buzz around it.  Also, it will be the one place where you can see all these vehicles under one roof, so you may notice a feature on a vehicle that you like, and so even if that vehicle isn’t something that fits your needs (or budget) you can ask about its availability on vehicles you are considering more seriously.

It’s Something to Do – Relatively Cheaply

It’s not free to go to the auto show – it is very expensive to rent your city’s convention center and get all the setup and take-down done, in addition to the staff working each of the 10-14 days the show goes on.  The manufacturers still end up putting a lot of money into it and consider it marketing and advertising, but selling tickets to the public does make it more feasible to run the auto show and make it an entertaining, in addition to informative, experience.  All things considered, the tickets are about the price of going to the movies (with separate prices for adults and children), and the manufacturers do make it a point to add some entertaining items, including some of their “supercars” that wouldn’t be feasible if the event was free to all and the manufacturers and dealers had to decide on what to show based on sales potential alone.

The other advantage to this setup is that it helps remove any sales pressure – you’re not going to see dealership personnel at the auto show (generally speaking).  You certainly aren’t going to get any high pressure sales tactics, or really any sort of sales tactics – the folks that generally work these types of shows have been trained on the various vehicles features and options, are very personable people, and likely have a list of local dealers that sell the brand that you can discuss actually purchasing the vehicle from, including the price details.  So don’t plan to negotiate your next purchase or lease at the show, but also enjoy the no-pressure opportunity to learn more about the vehicles you’re interested in, and consider it an additional research opportunity that augments any online research.

A Final Word About AutoMobility LA

Every auto show starts with “preview days” where the press gets an early view of the show and usually a chance to talk with some of the big shots at the manufacturers that attend the show (or specifically attend those initial days).  Last year the organizers of the Los Angeles Auto Show decided to add to the “preview day” model by arranging a conference called “AutoMobility LA” focused on the technology and innovation that is changing the way vehicles work, how we interact with them, and how we access and own them.

The conference was outstanding in many ways, but also a credit to the organizers for bringing in representatives from large companies as well as new start-ups that could present the innovative products they are offering.  Hosting this event in advance of a major auto show also gives these companies an opportunity to meet with representatives of the vehicle manufacturers, which in turn could integrate these new innovative products and solutions into the future vehicles. As you would expect, the conference is well attended by the automotive industry folks (and its a big industry – it’s as much as 7% of US GDP – which is over a trillion dollars annually in all), but some of the other large companies represented include Microsoft and Verizon, as well as many others.  I mention these two because it is an example of how the technology changes are basically making our vehicles computers on wheels (or in other words the ultimate “mobile devices”), and are the companies you would see at an automotive conference where a few generations ago it would have been Exxon and U.S. Steel instead. 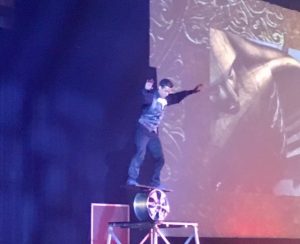 The entertainment at the AutoMobility LA kickoff party was fitting for an automotive innovation conference: a couple of performers reinventing the wheel, or at least finding new uses for it. 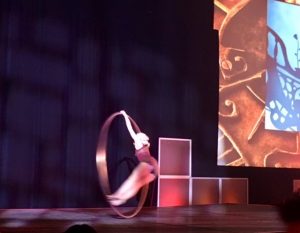 Next Article: “‘Tis The Season”