It may be surprising to have a publication called “Lease Wizard”, which provides information about auto leasing, publish an article about road trips, but we’re full of surprises around here.  Basic advice provided elsewhere on this site explains that leasing is best suited for those that drive below average miles (1,000/month | 12,000/year) and don’t have lots of unexpected trips. All of that holds true, but what if you’re now in the last 3-6 months of your lease, you’re on pace to complete the lease term quite a bit below your mileage limit, and you don’t have interest in purchasing the vehicle?

Obviously, one option is to simply turn the car in, and the dealer and lessor will sing your praises for years to come and even name their children after you…  Coming back to reality, they will be nice to you, then quickly move on to the next deal, and you’d be lucky to get a pet goldfish named after you, so don’t get up false hopes about this option.

Option 2 is to use the low mileage to your advantage – potentially there’s an arbitrage situation where you can buy the car at the residual value (purchase option price) and then turn around and sell it for more because the low-mileage vehicle is worth substantially more than it was forecast to be worth when your lease started.  Just realize that even though the dealer may be able to sell that car for much more than the residual value, it doesn’t mean you can, so don’t look at retail prices to see what you can get on your own.

We’ll come back to option 2 in more detail in a later article – because leveraging the added value of your lightly used vehicle in making your next vehicle lease or purchase is important.  But today’s topic is a bit more fun: when you’ve got the miles to spare, where are the best places to go driving?

There’s no perfect trip for everyone – everyone’s starting point and interests will be different.  Overall, the goal was a roundtrip of around 1,200-1,500 miles (so you should still have buffer in the final months of your lease if you’re on pace to finish 2-3k miles under), and it’s all in the US (since you likely would be required per your contract to notify your lessor, or finance company, if you planned to drive the car out of the country).   Over the next few weeks we’ll focus on six regions of the country, with two ideas each time.  Hopefully you like them, or it will spark some ideas of your own.  We would love to hear from you on this topic – either in comments to this article, or in replies on Facebook or Twitter.

Starting from either Pittsburgh or St. Louis you can see games in 6 cities and 7 ballparks (Chicago has 2 teams) while driving around 1,531 miles through seven states (city to city driving).  The recommended route is Pittsburgh to Cincinnati, then on to St. Louis.  From St. Louis you come back across the Mississippi River and head north to Chicago to see both the White Sox and defending World Champion Cubs, then east to Detroit, on to Cleveland, and then it’s 134 miles back to Pittsburgh.  One alteration would include bringing Milwaukee into the group and dropping Pittsburgh; Milwaukee is only about 93 miles from Chicago, so it could bring the total roundtrip down just under 1,500 miles if you made Cleveland the easternmost city included.

Other things to see along the way: the Rock and Roll Hall of Fame and Museum is in Cleveland; the Gateway Arch is in St. Louis; Chicago is the third-largest city in North America – with too many tourist attractions to name here.  In terms of these stadiums – the oldest two are both in Chicago, Wrigley Field is over 100 years old and a classic in every sense, while the White Sox ballpark (the name changes too often to keep track of) was built in the early 90s – and yet all the others included on this list are even more recent than that, and generally well-regarded as a great place to see a game! 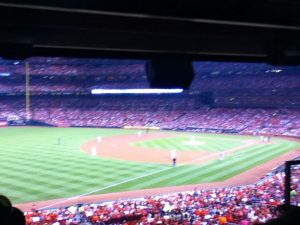 Obviously this is a trip for summer time, no later than September when regular season baseball is still scheduled.  The scenery along the road will be middle America – plenty of farmland and smaller towns along the interstates or state routes you use to get from city to city.

A Tour around New England

We’ll start this tour from White Plains, New York, a suburb north of New York City and only about 20 miles from New England – Connecticut – and we’ll hit all six New England states before returning back to White Plains.  First, we’ll head north to Burlington, Vermont, a nice small city on the shores of Lake Champlain, with several museums and summer activities on the lake.  From Burlington we head west 150 miles to Mount Washington, in New Hampshire, which is the tallest mountain in the Northeast US, with the peak at over 6200 feet elevation.  From Mount Washington the trip continues east into Maine, and Acadia National Park, a beautiful park right on the Atlantic coast that has rocky beaches, woodland, and granite peaks, including Cadillac Mountain. 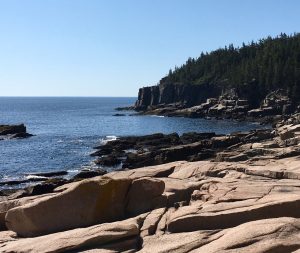 From Acadia National Park we’ll head 276 miles down the coast to Boston, Massachusetts.  Boston is one of the most historic cities in the nation, as well as the largest city in New England, so there is no lack of things to do here.  Once it’s time to leave Boston it’s 72 miles to Newport, Rhode Island.  Newport features regattas, a jazz festival each summer, and is home to many Gilded-Age mansions, notably The Breakers.   After leaving Newport it’s time to head west to Connecticut, but it’s just 48 miles to Mystic, so you’ll be there soon enough.  Mystic is a small village, but features an aquarium, as well as the Mystic Seaport, a maritime museum.

While it would be simple enough to continue on I-95 south (mostly west at this point) towards White Plains, we’ve only gone a little over 1,000 miles so far – so there’s one more proposed stop, in Springfield, Massachusetts.  Springfield is just 79 miles from Mystic, and once you arrive you are in the 4th largest city in New England, and on the banks of the Connecticut River.  It’s also the birthplace of basketball and the site of the Basketball Hall of Fame, as well as a location near several state and municipal parks and a large Six Flags amusement park too.  Finally, after leaving Springfield it’s time to head back to White Plains, a trek of 121 miles, which will bring the seven destination, seven state trip to a close with 1,238 more miles on the odometer.

As with the proposed trip in the midwest to baseball parks, this trip is best suited for the summer time, definitely best completed by mid-October.  Obviously, Vermont, New Hampshire and western Massachusetts may be suitable for skiing trips in the winter, but road trips, especially those that get you a chance to see the back roads of New England, are best when the chance of snow and torrential rain is at a minimum.  Happy traveling!

Next Article: “At the Dealership”

Previous Article: “Leasing Vs. the Most Powerful Force in the Universe – II”