Albert Einstein reportedly said compound interest is the most powerful force in the universe.  Of course, the earliest known written report of this statement was about 30 years after he died, so he wasn’t in position to confirm or dispute saying it.  But given the genius of the statement, we hope Mr. Einstein would appreciate it being attributed to him.

To understand why Einstein, or any genius, may utter this statement it may help to review the difference between compound interest and simple interest.  Simple interest is where the interest that accrues doesn’t get added to the principal to determine the next period’s interest accrual.  Basic example: the bank offers a deal where you deposit $1,000 on January 2nd and must come back each week and collect $1.  The principal never increases about $1,000, but at the end of the year you have collected $52 in simple interest.  And that would be 5.20% interest (52/1000).  Presumably, if you left the $1,000 with them for another year you would collect another $52 in your 52 trips to the bank.  But if you ever wanted to stop participating you would withdraw exactly $1,000, no more, no less.

Now, let’s assume that the bank realizes that it’s a lot of work to do all these transactions for $1 each, and they’re tired of the customers complaining about the line out the door just to collect $1.  So they improve the program and allow customers to automatically deposit the interest into their account, and the following week’s interest payment would be based on the new principal amount, which is the original $1,000 plus whatever interest has accrued but not been collected.  This is compound interest: when interest accrues on what was originally interest.  And here’s how it’s impact on your balance looks: 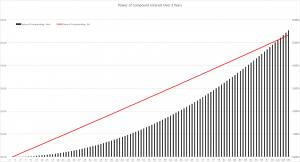 As you see, early on there’s not much difference between simple interest and compound interest: after 3 months (13 weeks) the increased interest earned is just 8 cents, but after another 13 weeks the total increase from compounding is more than 4 times that: 33 cents.  Similarly, the difference for the first full year just comes out to $1.35, but in the second year the difference grows to $4.19 for that second year alone, and a cumulative $5.54, or 5.33% more interest earned in two years than would have been earned with simple interest.

Take another look at the graph: while we’re not going to further try to prove or disprove the physicist’s involvement with the line attributed to him, it is clear that compound interest does resemble a physical occurrence that can be very exciting to watch from one perspective, but have a very negative impact from another: a snowball rolling down a hill!  From the top of the hill it is very exciting to watch the snowball grow and pick up speed.  From the bottom of the hill your goal is to avoid being flattened.  When you’re borrowing money, you’re at the bottom of the hill.

Here’s where leasing comes in – and how it can help you avoid being flattened by the power of compound interest.  The rent charge component in a lease, the equivalent to the interest portion of the monthly payments in a loan, is truly simple interest.  The rent charge component is the same in the first month as in the last month.  In a 72 month car loan the interest payment portion of the first month’s payment is anywhere from 10% to 60% of the total payment.  That means that the balance is not coming down as much, and all that remaining balance will have more interest accrued on it, which will be in the second month’s payment.  And so on, so that even with a great rate on a car loan when you’ve made half the payments you still have over half the original loan outstanding.  And if you have a high interest rate on your loan, then you could be closer to 60% of the balance outstanding after 50% of the payments were made.

In fact, the biggest driver of the impact of compound interest – in other words how big the snowball gets and how fast it gets downhill – is the interest rate.  The higher the interest rate the bigger the difference between compound interest and simple interest for the same rate.  Therefore, while leasing is usually done by people with great credit that are going to get the best rates, it is actually those with lower credit scores that should look into leasing further, because they have the largest potential savings in terms of “cost of money” (the finance charge in loan vs. rent charge in lease).

Next Article: “Leasing Vs. the Most Powerful Force in the Universe – II”